Cooking in a cast iron is exceptional. It has amazing heat retention, a naturally nonstick surface, and unbeatable durability and value. They are basically indestructible. One of the best parts of owning a cast iron skillet is that they are easily restored, even if they have been mistreated. They can last generations if properly taken care of. There are many do’s and don’ts when it comes to how to clean a cast-iron skillet. To be honest, it’s almost enough to scare anyone off from cast iron completely! But don’t worry! Even if by chance you manage to take off some of your skillet’s smooth seasoning, you can always re-season it after cleaning. It’s really not that big of a deal, and it’s quite simple. Today, we will show you all you need to know about cast iron cleaning and care. 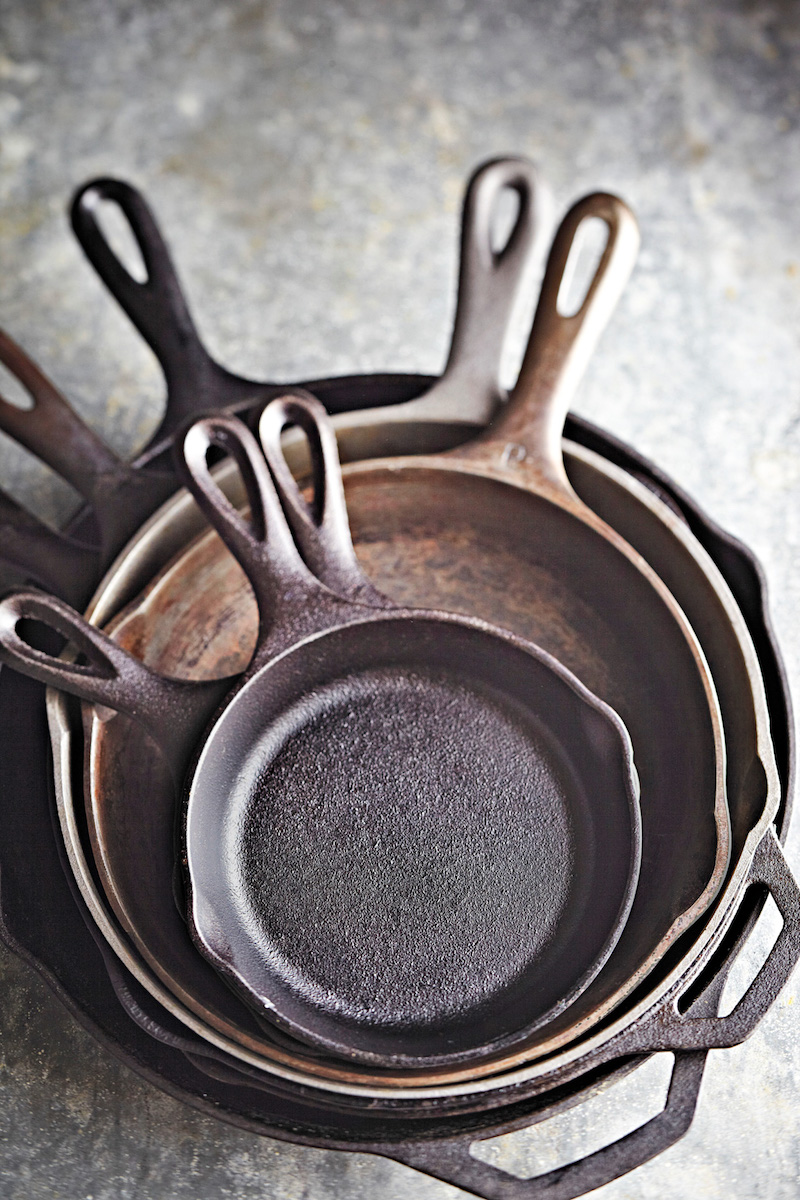 There are many benefits to owning a cast-iron skillet. We have already mentioned some, but there are much more. Here are some of the main benefits you will gain from having this beauty in your kitchen.

How to clean a cast iron skillet 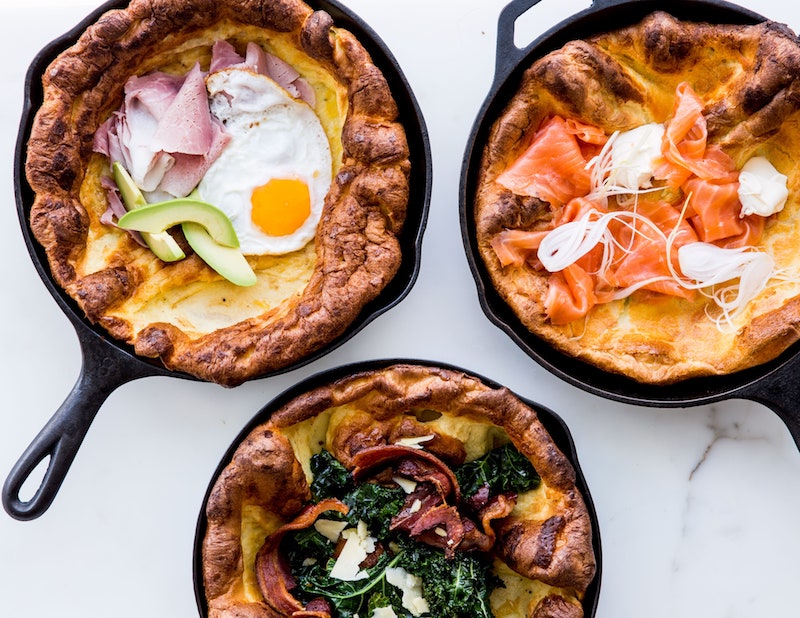 Having a non-stick skillet is a real blessing. Once your cast iron has a nice sheen to it, it basically becomes nonstick. This is great on multiple levels. Not only will things not stick, but you will also cook with less oil. Consequently, cooking with less oil and fat has added health bonuses. Plus, you can make an amazing omelette that won’t have to be turned into scrambled eggs mid-cooking. 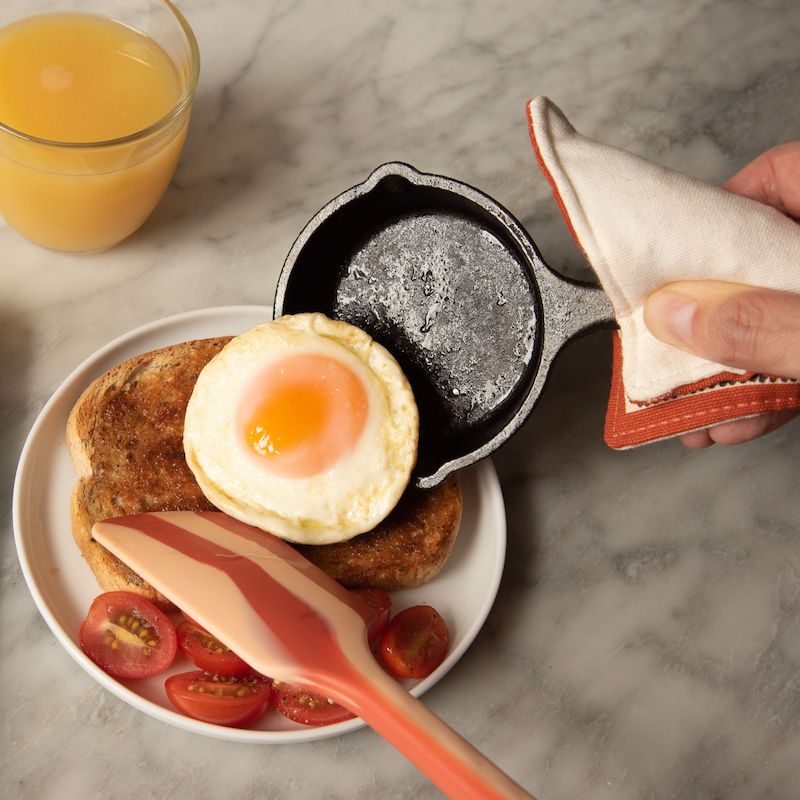 Another incredible benefit of owning cast iron cookware is that they are chemical-free. It’s a great alternative to other store-bought non-stick pans, since most of them contain perfluorocarbon. This is a chemical that has often been linked to cancer, developmental problems, liver damage, and more. The risk of this chemical being released into your food is greater when the pan is scratched. However, with cast iron, you don’t have to worry about things like that. 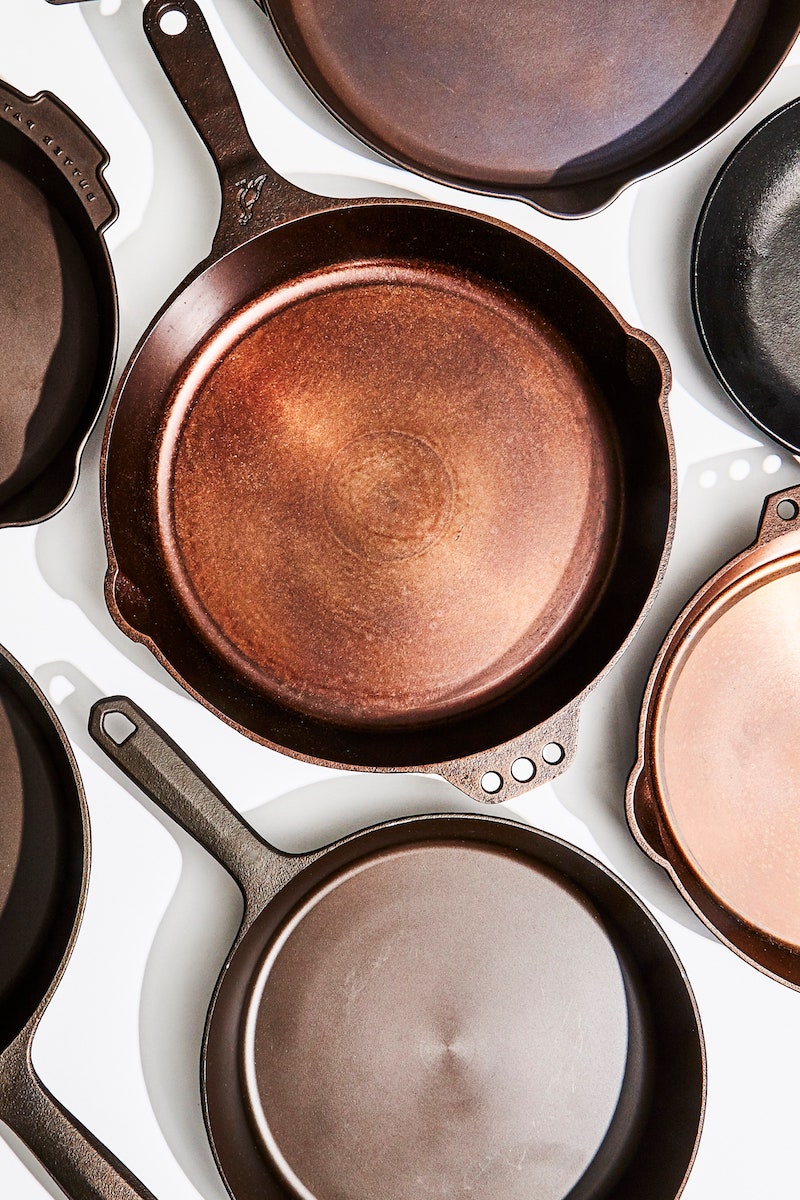 As we already mentioned, with proper care and cleaning, it can last decades. Many people have cast iron cookware that has been passed down to them from parents and even grandparents. With this guide, we will show you how to take proper care, in order for your cookware to last you a lifetime. 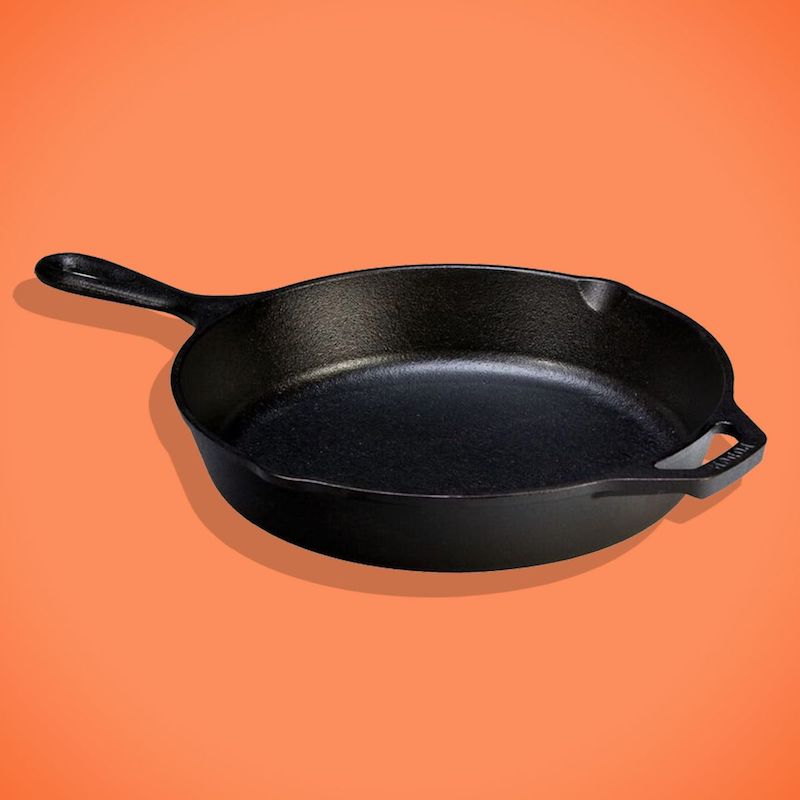 As human beings, we need a lot of vitamins and minerals to be healthy and function properly. This includes iron. This is possibly one of the greatest health benefits of owning a cast-iron skillet. It adds iron naturally to your food! Many people suffer from iron deficiency, and cooking with cast iron pans can help increase your iron content by as much as 20 times.

It adds iron naturally to your food 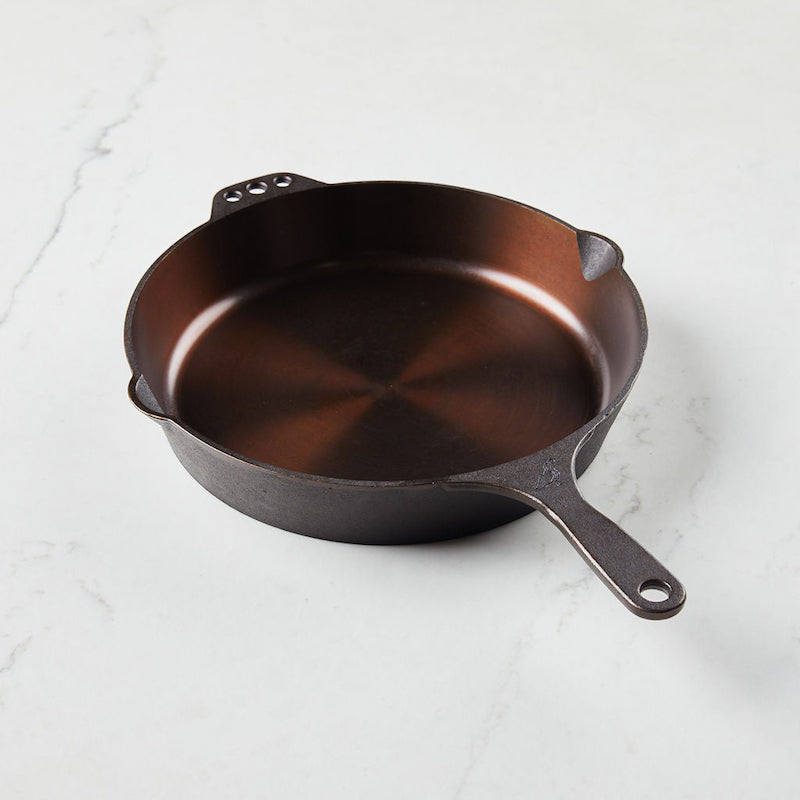 Another amazing thing about having cast iron cookware is that they have a dual purpose. Most of us think we can only use the skillet on the stove. However, since cast iron doesn’t have any added plastic handles or perfluorocarbon coatings, it’s also safe to use in the oven – at any temperature! You can also use it on an outdoor BBQ grill, or open campfire.

Use it on any surface While you may not believe us, one of the most popular benefits of having a cast iron pan at home is that they are quite easy to clean. They don’t require fancy, expensive soap, and food lifts right off them. All you need to do is be consistent and season it correctly.

Cast iron pans are quite easy to clean 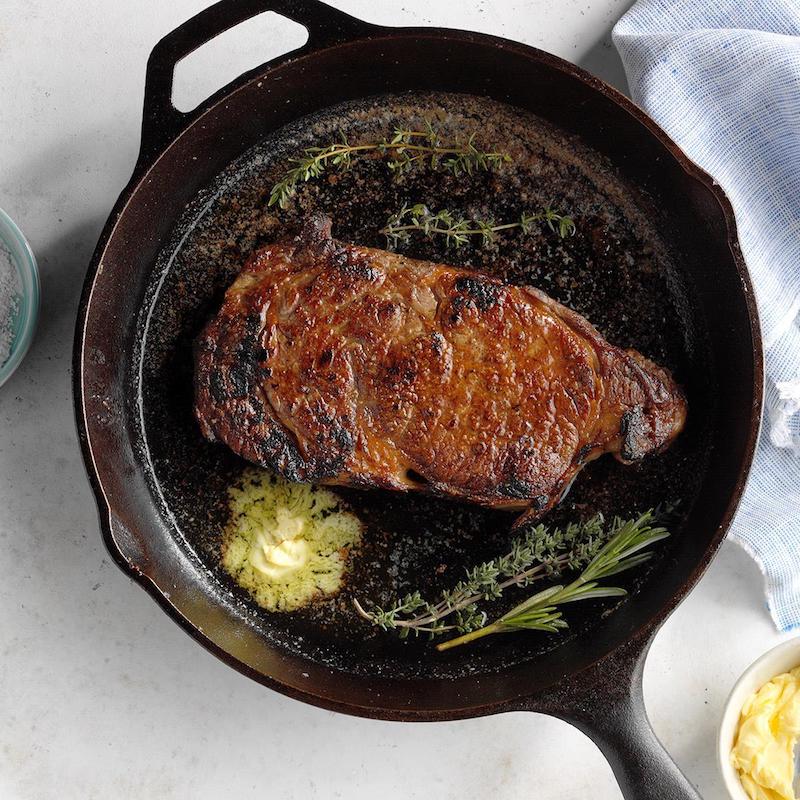 Cast iron cookware can make almost anything. From searing pork chops, grilling stakes, sauté veggies, and frying eggs and bacon, to baking gooey skillet cookies and much more. Get creative in the kitchen with this super versatile pan. 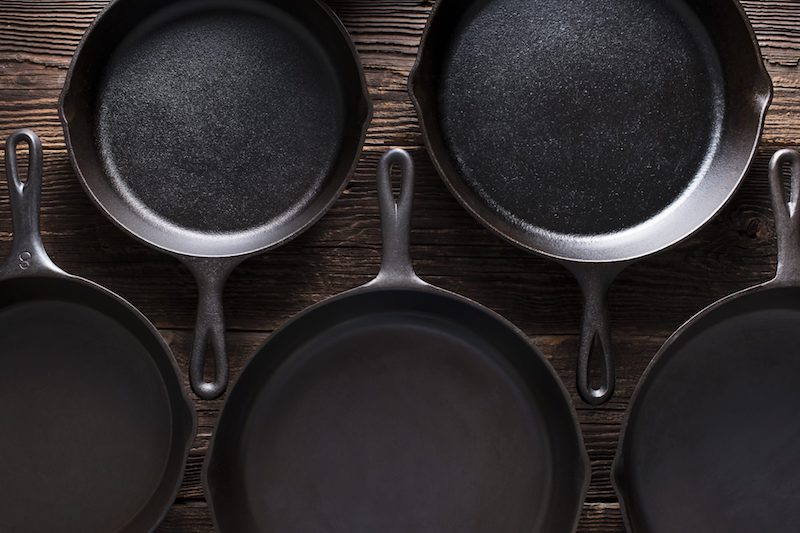 Within these benefits, we mentioned a couple of times that cooking with a cast-iron skillet can make your food healthier. However, what we didn’t say is that it also makes your recipes even tastier. Thanks to its incredible heat retention, you can achieve amazing crispiness, flavor, and fluffiness. Don’t believe us? Try making some fried chicken or shrimp in it!

It makes your dishes even tastier 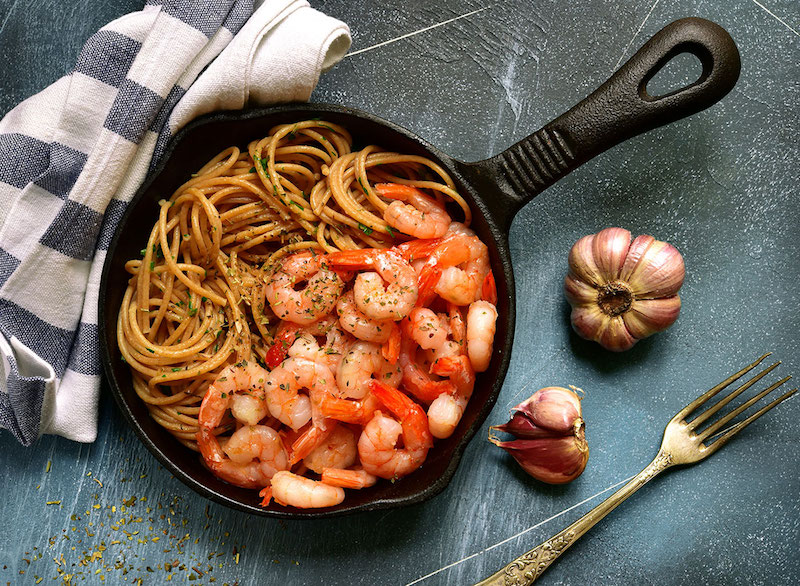 How To Cook With Cast Iron?

From start to finish, using cast iron is simple, straightforward, and uncomplicated. When cooking in a cast-iron skillet, you should still add a bit of oil to the pan before adding in the food. Even though it’s generally nonstick, this will help ensure the food doesn’t stick at all, and it will help build layers of seasoning. You can use whatever oil you prefer, as long as the cooking temperature is below the smoke point of the oil. Whether you choose olive oil, vegetable oil, sunflower oil, and grapeseed oil, they are all great multipurpose cooking oils. You can use them for everything from sautéing to baking. 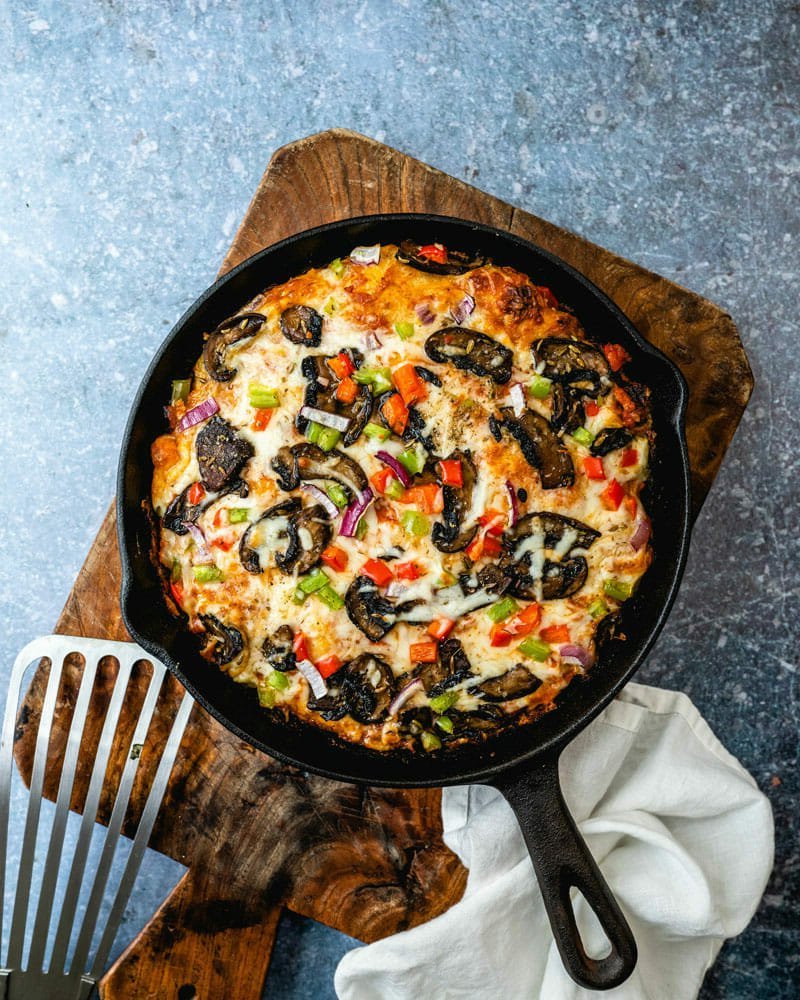 How To Wash a Cast Iron Skillet?

Washing your cast iron doesn’t have to be a stressful experience. Follow the below guide on how to clean a cast iron skillet easily and without any fuss. Just avoid using anything too abrasive because it can damage the pan and strip off the seasoning.

How to clean a cast iron skillet easily 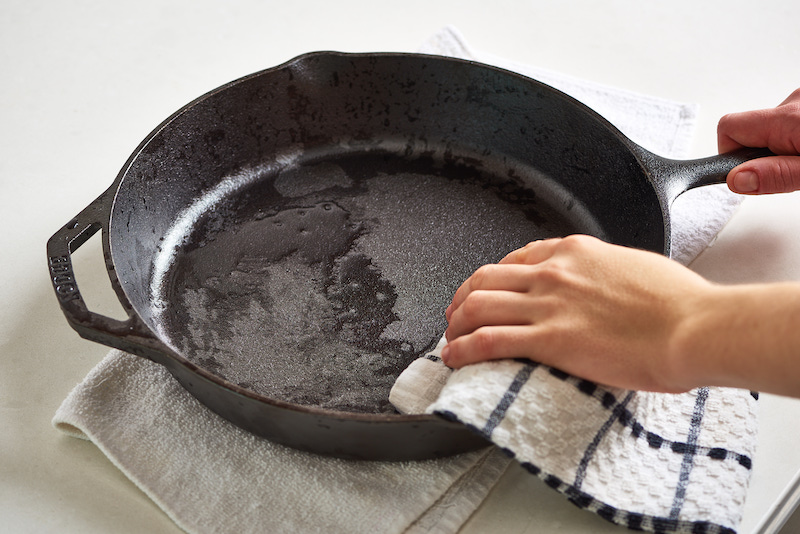 Rinse the skillet with hot water 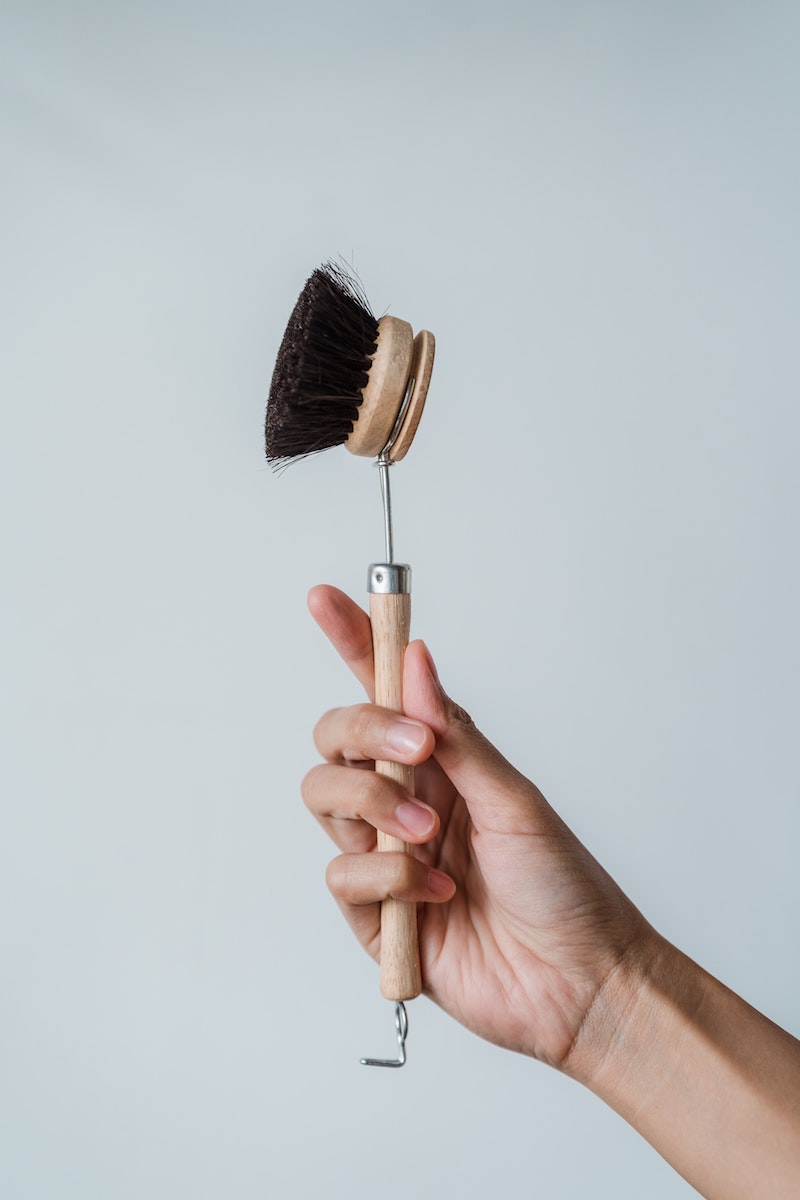 This method is quite controversial. Some say it’s perfectly fine to use soap, others are strongly against it. However, you can use dish soap, as long as you re-season your pan afterwards. Just use mild dish soap and a scouring pad or a cast iron pan cleaning brush. Wash it, scrub it, rinse it, then wipe it out well and season it with a few drops of oil and store.

Use a gentle dish soap Besides a good wash and scrub, you can also use some really hot water and a spatula to help take off any seriously burnt-on food. It’s a common method used by cooks to clean flat-top grills in restaurants, so it will definitely work. Rinse the skillet with hot water. Dry immediately afterwards.

Use some really hot water and a spatula 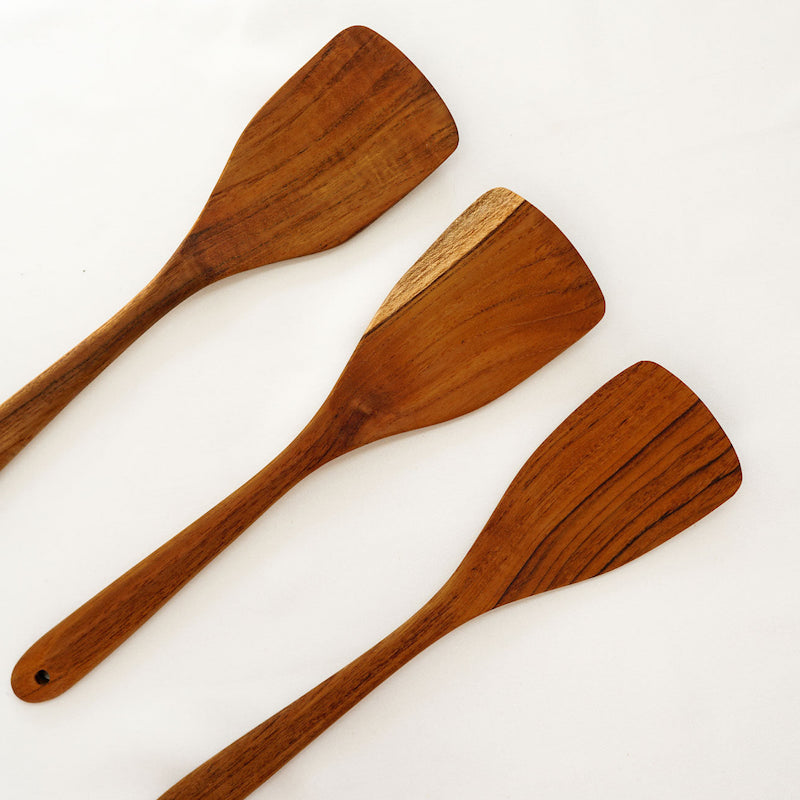 To remove stubborn bits of food, just pour a cup of coarse kosher salt into the still-warm skillet. Use a folded kitchen towel to scour the surface. Discard the salt and rinse the skillet with hot water. Dry immediately afterwards. 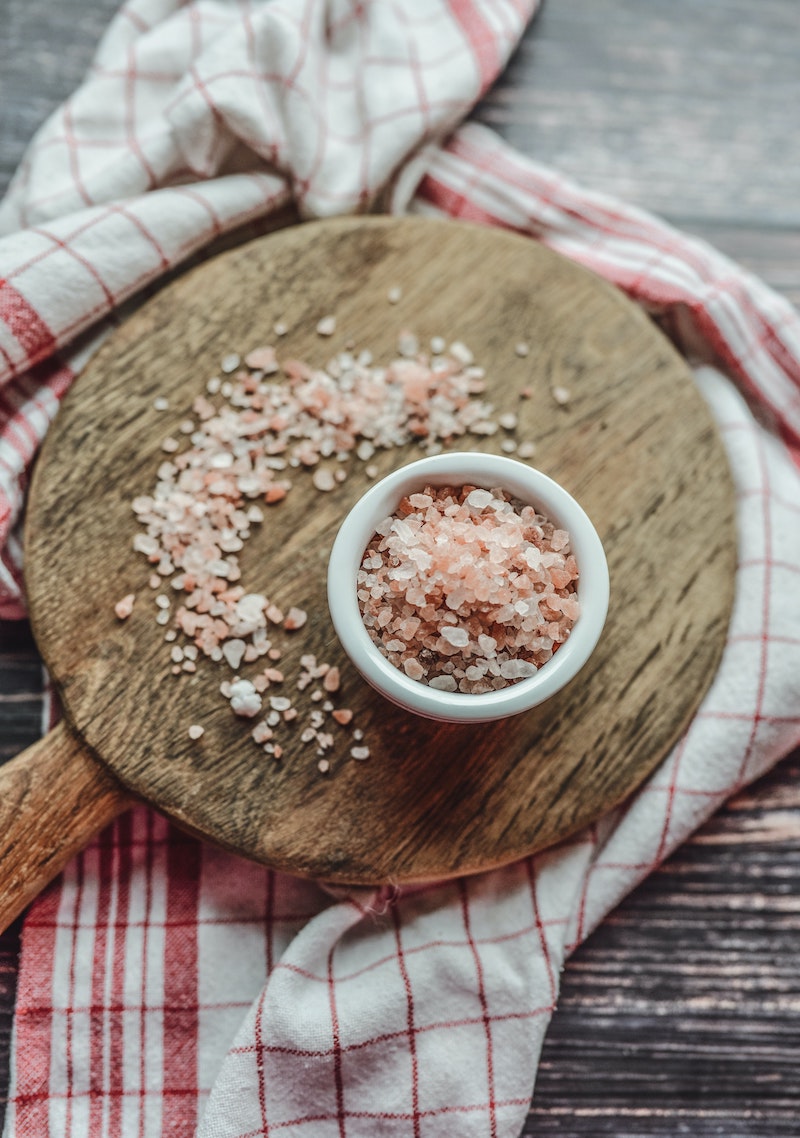 How To Remove Rust From Cast Iron Skillet?

If your pans have gotten some rust on them, don’t throw them away just yet. Most often this will occur if you forget to dry your skillet after washing and if you haven’t seasoned it properly. But don’t worry, we will show you how to easily get that pesky rust off and leave your cast-iron cookware looking brand new! 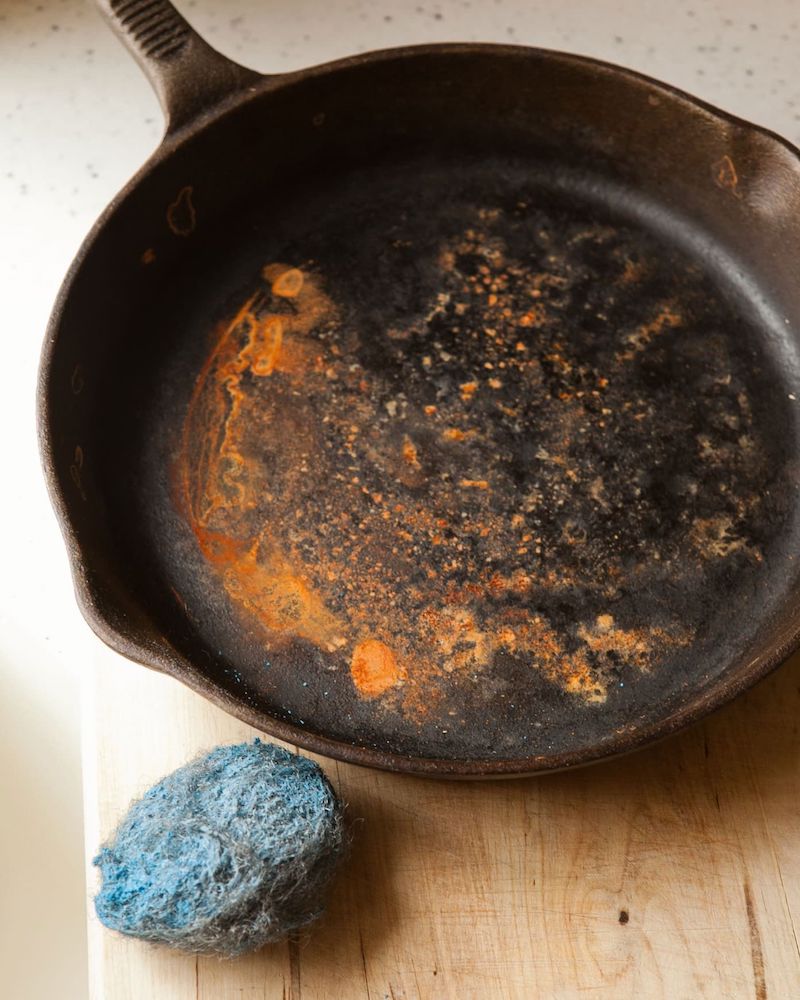 If you have a thin layer of rust on your pan, you can get away with just this method.

Mild rust on a pan 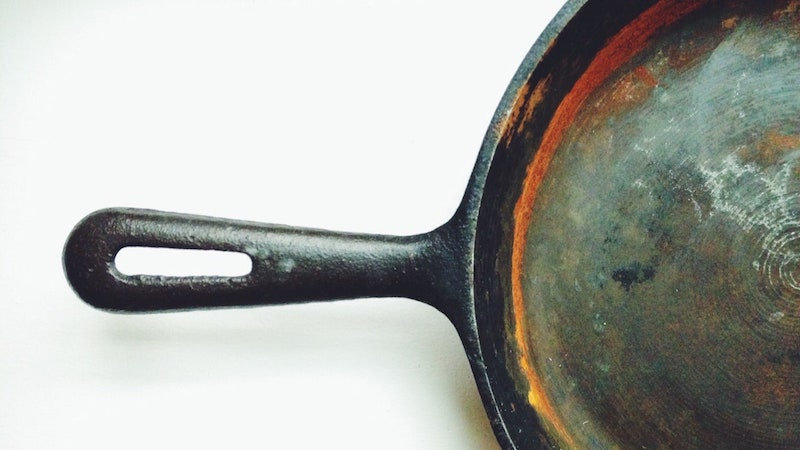 Sometimes the rust might be harder to get off, that’s when this effective vinegar soak method comes in handy. Keep in mind that once the vinegar dissolves the rust, it will go to town on the original cast surface of the pan. The possible pitting that can result is irreversible, so pull your pan from the soak as soon as the rust flakes away easily. If the pan has gotten so rusted that it’s deeply pock-marked or pitted, just forget it. All it’s good for is for some rustic decor.

Cast iron is good for is decoration 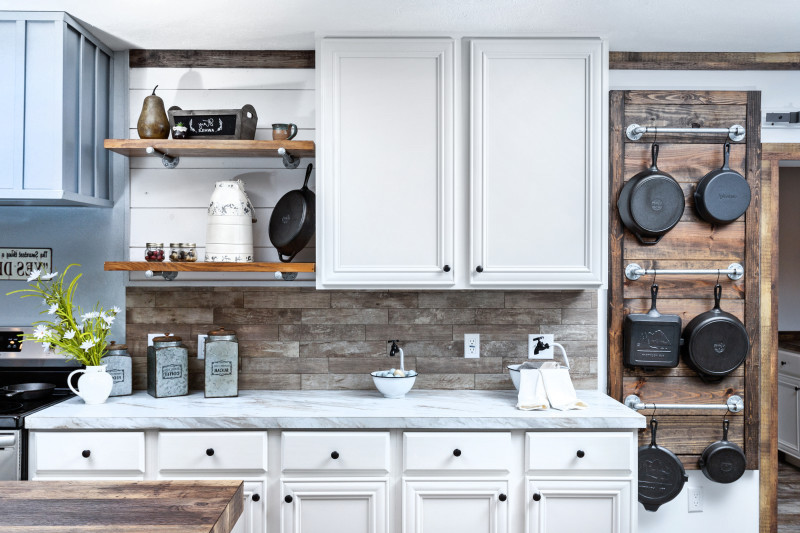 How To Re-season Cast Iron? 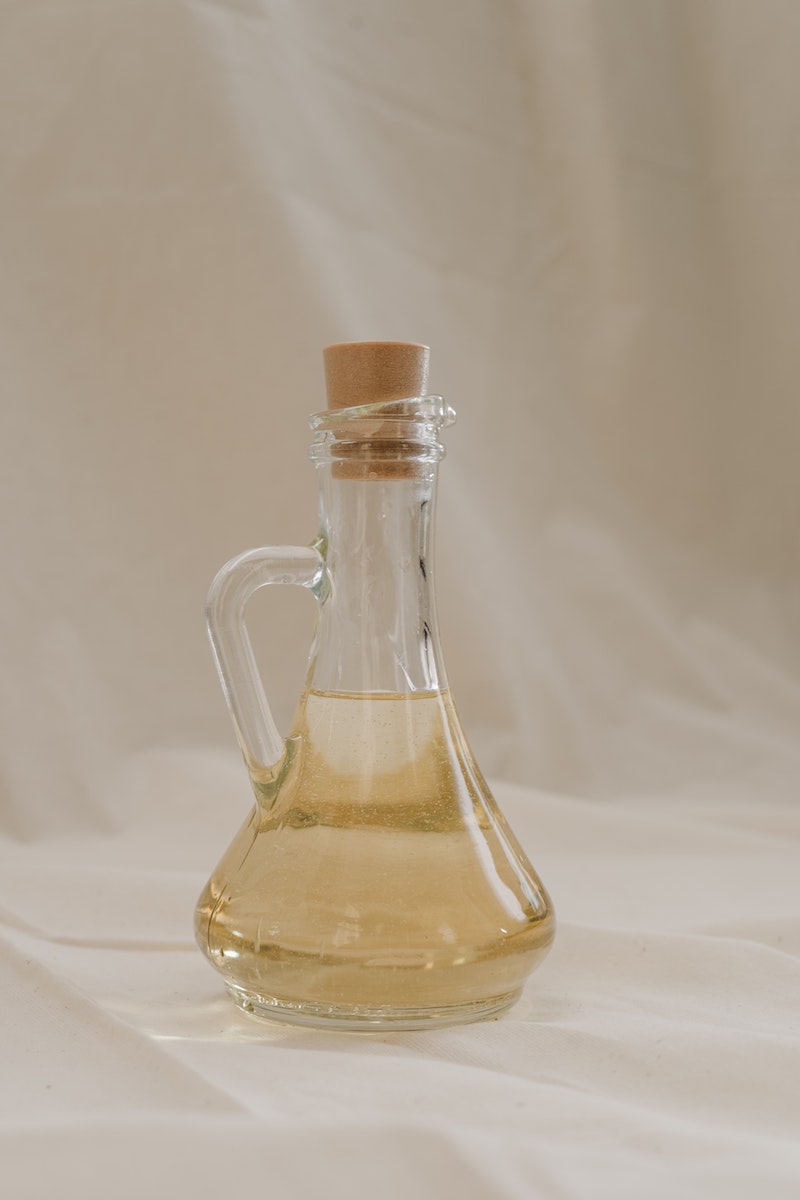 Do it on the stove top 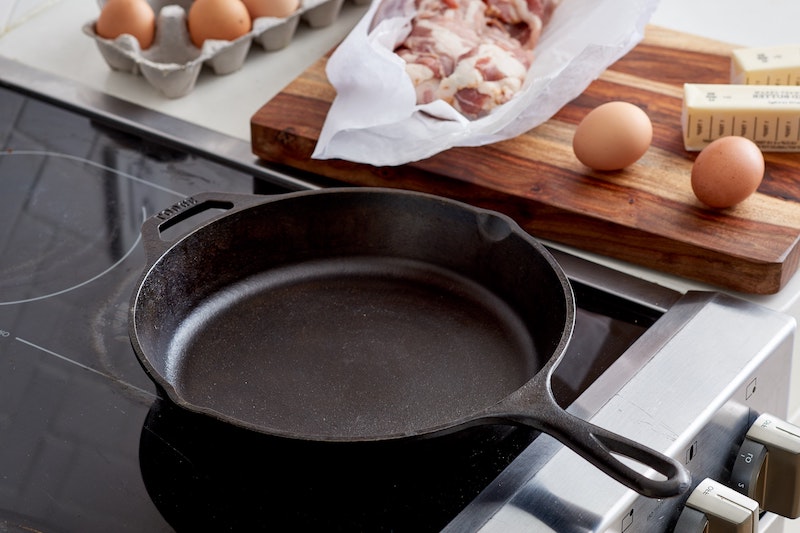 You can also use the oven 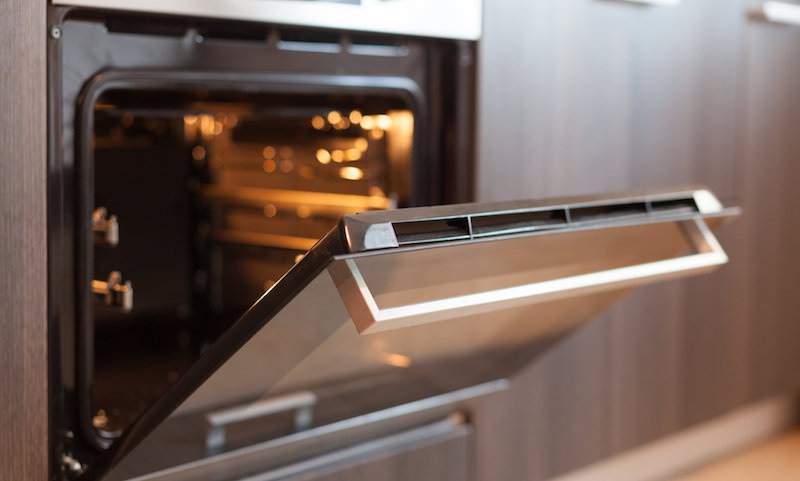 In order for your cast iron to last you your whole life and for the food to taste just as yummy, there are tips and tricks to follow. Here is everything you need to know. 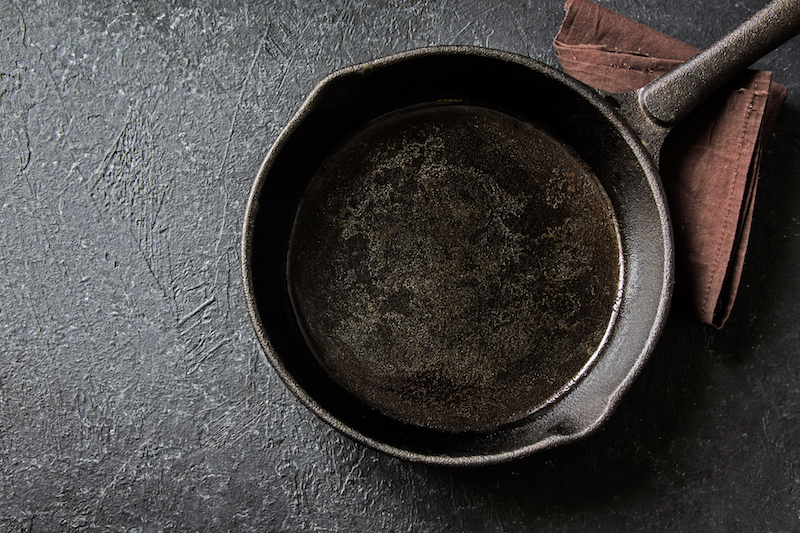 Do use gentle utensils like wood, silicone, and rubber. The occasional metal fish spatula or pancake turner is okay, but try to avoid lots of metal utensils in your pan – especially while building up the seasoning.

Do clean the pan immediately after use. And avoid soaking it.

Dry the pan thoroughly, reheat it, and oil it before storing. Let it cool to room temperature. The oil will form a protective barrier preventing it from coming into contact with moisture or air until its next use

Always dry the skillet after washing it. This will help avoid the occurrence of rust. Use either a dry cloth or paper towels or briefly heat on the stovetop over low heat.

Re-season your pan after use. After each meal, it’s important to keep the pan lubricated with a thin coat of fat. If you won’t be cooking with your pan for a while, this is especially important. A thin coat is all you need, and will go a long way to preventing rust during storage. 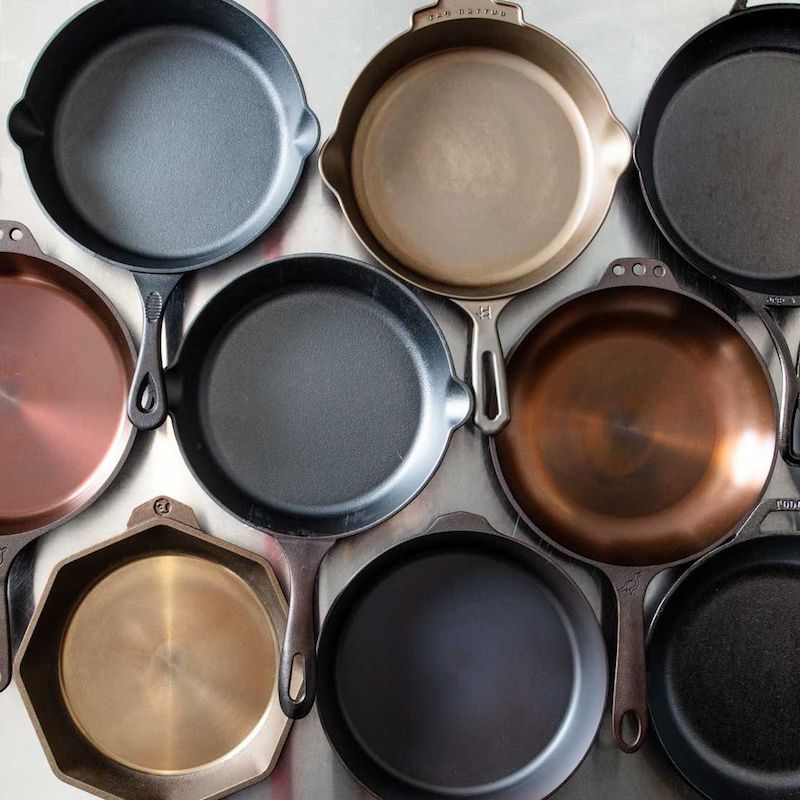 Avoid tough abrasives. These include metal scrubby scouring pads, and cleaners like Comet or Bar Keepers Friend. The scrubby side of a soft sponge should be plenty for most tasks

Do not put your cast iron pan in the dishwasher. The moisture and detergent could damage the seasoning.

Do not soak your pan This was our ultimate guide on how to clean a cast iron skillet, season and re-season it, as well as basic maintanace tips and tricks you may need. We hope you found it useful. You can now go enjoy and make delicious meals in your cast iron skillet without worrying about damaging it!

Ultimate guide: how to clean a cast iron kkillet 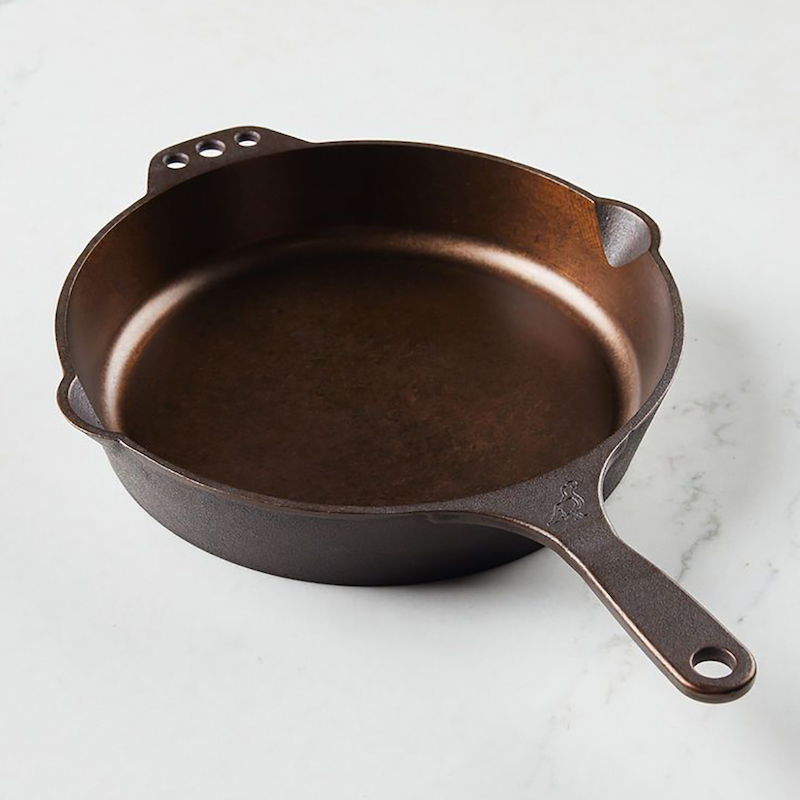 7 Genius Ways To Use Your Kitchen Appliances

7 Common Things You Absolutely Don’t Need in Your Kitchen

Kitchen Trends 2023: Here Is Everything You Need To Know

TV Buddy vs Chrome Cast: Which is Better? 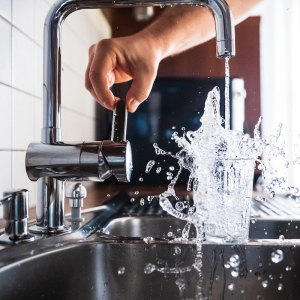 When Should You Hire Professional Plumbing Services? 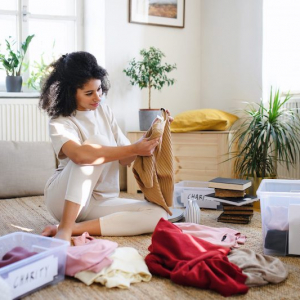 How To Declutter Your Home: 10+ Things You Don't Need 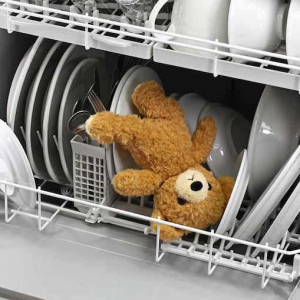 Simple Guide: How To Clean a Dishwasher In 5 Easy Steps Find Out Your Spirit Animal, According To Your Zodiac Sign